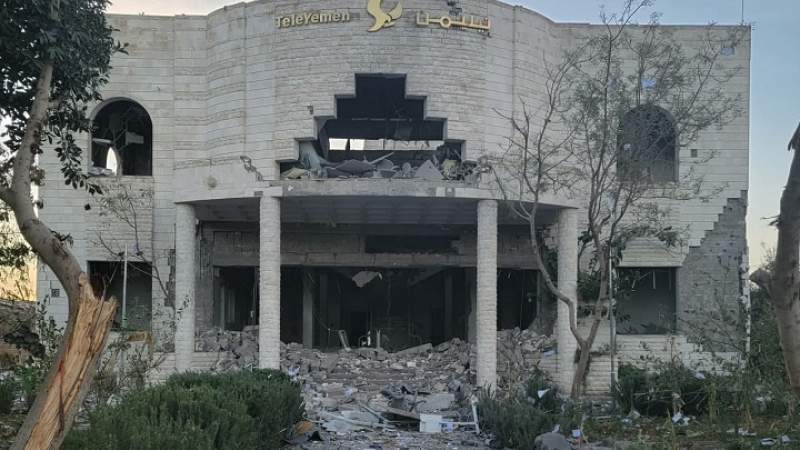 News - Yemen: The Ministry of Communications and Information Technology announced the interruption of international communications service to Yemen as a result of the US-Saudi aggression’s bombing, while TeleYemen categorically denied the aggression’s allegations about using the company’s site for military purposes.

The Ministry of Communications and Information Technology held a press conference on the ruins of the building of the Yemeni Company for International Telecommunications, TeleYemen, on Monday, which was targeted by the US-Saudi aggression on early Monday,

“This attack is part of a series of systematic targeting of communications and internet services in Yemen,”  Minister of Communications Misfir Al-Numeir said in a speech during the conference.

He called for neutralizing communications and its various services from any targeting, which would constitute a war crime.

Meanwhile, TeleYemen's statement confirmed that the company's building targeted by the coalition of aggression last night contains only technical and basic equipment to provide international communication and Internet services.

“As a result of targeting the TeleYemen building,  the building and all technical equipment were completely destroyed, and international communication services were interrupted,” the statement explained.

It pointed out that many vital services and sectors in all regions of Yemen were affected and citizens were deprived of one of their basic rights.

The company categorically denied what is being circulated in some media about the use of the company's site for military purposes, confirming that all technical equipment is used for civil service purposes.

TeleYemen called on the international community and all international, humanitarian and human rights organizations to do their duty to stop the repeated and systematic destruction of the infrastructure of the telecommunications sector.

The company indicated that the specialized engineering teams started their work to move, replace and repair the damaged equipment. It is also making great efforts since the first moments of the bombing to overcome and solve many of the problems caused by the destruction of the technical equipment.

Services are expected to return within the next few hours, it added.

The US-Saudi-Emirati aggression launched two raids on early Monday targeting the building of the Yemeni Company for International Communications in the Western Jraf area in the Al-Thawra district, which led to its complete destruction.

The aggression's raids also caused severe damage to the building adjacent to the targeted building.

On January 21, the aggression aircraft targeted the Communications Office in Hodeidah with several raids, which led to the interruption of internet and international communications in Yemen for several days. Then it was restored with local efforts.

The US-Saudi aggression threatened to target the headquarters of the Yemeni ministries in a continuation of the recent wave of escalation that mainly affected Yemeni cities and left, according to the Yemeni Ministry of Health, about 500 civilians martyred and wounded.