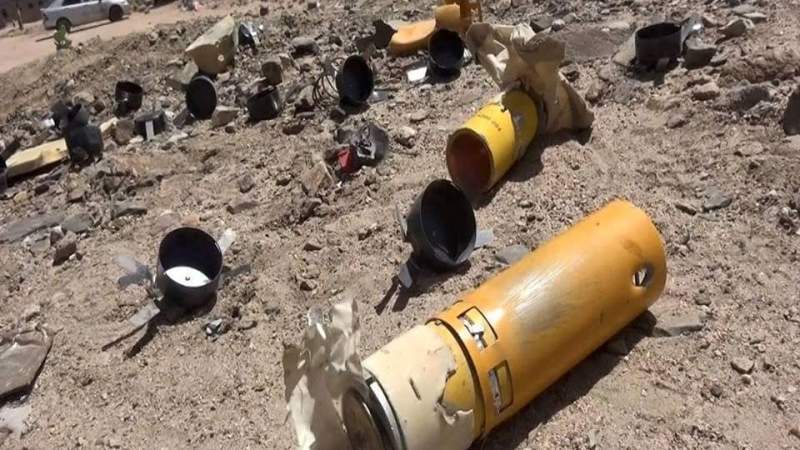 News - Yemen: A citizen was injured by the explosion of a with a remnants cluster bomb dropped by US-Saudi aggression in Hajjah governorate.

Days ago, three children were injured with a remnant mine used by US-Saudi Forces in Al-Hawk district of Hodeidah governorate before pulling out unexpectedly.
The Executive Center for Mine Action reported that the number of incidents increased dramatically due to lack of needed equipment used to treat the remnants.
The center stated that "the victims' tolls, due to the bombing of mines and cluster bombs, is increasing, in light of preventing the entry of necessary equipment by the Saudi-led aggression."
Earlier, The head of Executive Center for Mine Action, Ali Safra, confirmed the monitoring of 113 cases of cluster bombs victims since the beginning of the humanitarian truce.
"We monitored 26 cases of mine victims only during the first ten days of this month," He said.
He pointed out that there is an increase in the number of victims of cluster bombs and mines with the return of citizens to their homes during the days of the truce.
He also confirmed the registration of 326 of victims of cluster bombs and mines in Hodeidah Governorate since the beginning of the year.
He pointed out that the number of victims from cluster bombs since the beginning of the US-Saudi aggression has reached 3,956 killed and injured, including 400 children and 115 women.
Safra indicated that the US-Saudi aggression has prevented the entry of mine detectors into Sana'a since 2018, and our field teams face multiple dangers and obstacles because of that.
Recently, Safra stated that Hodeidah, Al-Baidha'a, Marib, Al-Jawf, Nihm and Sa'ada are the most infested areas for mines and bombs, in which the aggression used the most deadly and latest military technology in our country. He explained that the Center is continuing to work to clear areas contaminated and affected by the bombs and mines of the US-Saudi aggression, pointing out that mines and remnants - especially cluster bombs - have become a national issue and a societal problem that must be disposed.
It is noteworthy that the Executive Center for Mine Action announced the discovery of 544 mines and cluster bombs left over from the aggression during the first week of January 2022.
#US_Saudi_Aggression #Hajjah #Cluster_Bombs about 5 days