Leader: Saudi-led Aggression Did Everything It Could to Occupy Sana'a, But Failed 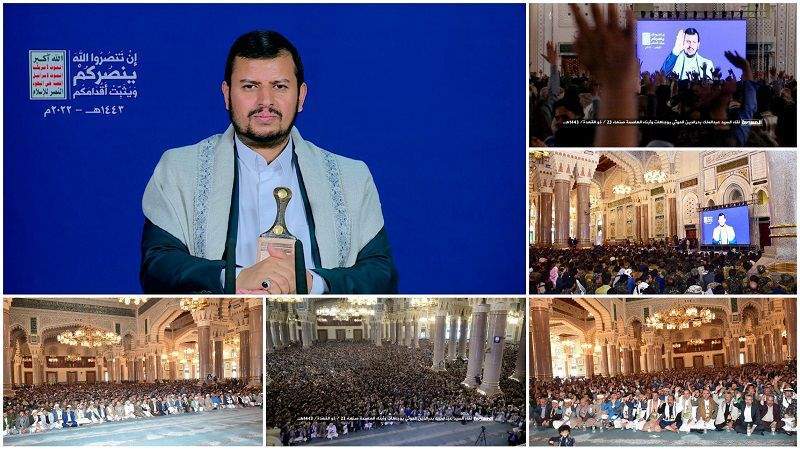 News - Yemen: The Leader of Revolution, Sayyed Abdulmalik Al-Houthi, stressed that Sana'a is the back on which the people of the country rely in confronting the aggression and the city that hosted the displaced from various governorates.

In a speech broadcast live from the Yemeni capital on Wednesday evening, Sayyed Abdulmalik pointed out that enemies did everything they could to occupy Sana'a, but they reached the conviction that “Sana’a is far away, Riyadh is closer.”

“The Saudi-led coalition of aggression sought to subject the Yemeni capital to heavy aerial bombardment and perpetrated the most heinous crimes to wrest control over it. The alliance made use of internationally banned weapons, and tried to occupy it through launching large-scale offensives,” he said.

He stressed that the enemies who bet on resolving their battle between two weeks to two months have reached the eighth year and have been filled with despair and frustration.

The Leader further said that enemies sought to illegally seize power in Sana’a last December, but the seditious plot was thwarted.

"In the last months before the truce, the aggression launched propaganda campaigns before the bombing to put pressure on the people and displace them," he added.

He said enemies had also planned to stoke chaos and internal strife in Yemen through economic pressure and impoverishment, but the level of public awareness and steadfastness, especially in Sana’a, shocked them.

The Leader pointed out that the coalition of aggression planned to carry out bombings and target citizens in Sana'a with operations and car bombs, stressing that many of the plots targeting Sana'a for security was failed. He thanked the men of the Ministry of Interior and the Security and Intelligence Service.

Sayyed Abdulmalik called for the continuation and raising of security cooperation between citizens and security services.

Sayyed Abdulmalik touched on the enemies' economic targeting and restricting people's livelihood through the siege.

"In conjunction with the living restriction, the enemies carried out a campaign of incitement to push people towards creating chaos and turning the battle into an internal conflict," he said.

He explained that the aggression wanted people to wrestle among themselves instead of confronting the enemy that besieged and prevented the entry of oil ships, stressing that the enemies were shocked by the level of awareness.

He considered that the wise approach to confronting any problems or errors is to move practically within the framework of responsibility.

Danger of Soft War, Importance of Addressing It:

Sayyed Abdulmalik talked about the enemy targeting the capital and the country in general with a soft war on the intellectual and moral level.

“Enemies even tried to undermine the Yemeni nation’s ethics and spiritual values through the promotion of organized crimes,” the Leader said, emphasizing that Yemenis have exercised great patience in the face of hardships imposed by the Riyadh regime and its allies.

He affirmed that the Yemeni nation will "never give in to pressures" and will "never be enslaved by enemies", as their resistance is rooted in faith.

“Enemies try to use social media platforms to undermine the Yemeni nation’s morale and ethics. Enemies promote various crimes in their occupied Yemeni territories,” he declared.