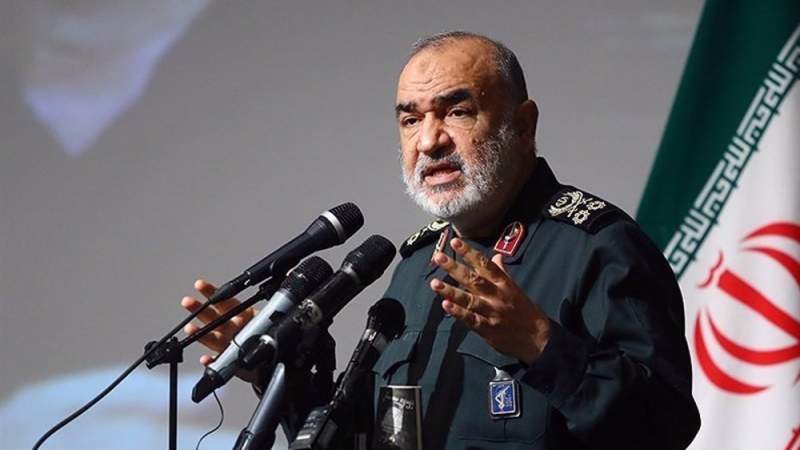 Iran warns the Al Saud regime to “mind its behavior and control its media [outlets] or [the actions] will backfire on itself," Salami said while addressing the units of the IRGC's Ground Force participating in a large-scale military exercise in Iran’s northwestern border regions.

He gave Saudi Arabia an ultimatum, cautioning it against interfering in Iran’s internal affairs through the kingdom's news media outlets that seek to lead the Iranian youths astray.

He stressed the importance of maintaining national security as a principled policy of Iran and reminded the neighbors that the Islamic Republic pursues the policy of friendship and fraternity as long as the enemies hatch no plot against it.

The IRGC chief said any change in the geography of the region is Iran's red line, adding, "We are a brother of any country and power that is interacting with us properly. We call on our neighbors to resolve their problems through interaction and non-military approaches."

"We have interests in the region, and if any change takes place in any part of the region and our interests are threatened, then we will not remain neutral and will defend our national interests," the IRGC chief pointed out.

Salami's remarks came as Saudi-sponsored media have stepped up their rhetoric against Iran amid the recent protests and deadly riots in the country following the death of 22-year-old Mahsa Amini in police custody.

Iranians have held protests over the passing of Amini. However, some extremist elements derailed the protests and incited violence against security forces. Western-backed media outlets have also encouraged violence. Iran says it will not allow interference in its internal affairs.

The foreign-backed violent riots have also claimed dozens of lives from both security forces and ordinary people as the Western media and Persian-language news networks continue to provoke riots in Iran.

In a meeting with members of the Expediency Council on Wednesday, Leader of the Islamic Revolution Ayatollah Seyyed Ali Khamenei said the riots in several Iranian cities were devised by enemies as a “clumsy,” “foolish” and “passive” reaction to the nation’s great progress.

"The Iranian nation made great moves in a short period of time, which were 180 degrees opposite to the global arrogance’s policies, and they were forced to react,” the Leader said, referring to the United States and other Western powers.

‘Neighbors should not allow Israel’s inroads into their countries’

Elsewhere in his remarks, Salami denounced the infiltration of the Israeli regime in a number of countries located in the south, west and north of Iran, saying, some of Iran’s neighbors “may argue that their (Israelis’) presence poses no threat to our (Iran’s) security, but Israel's nature is [based on] creating insecurity.”

“We advise the neighboring countries not to let Israel into Islamic territories because they (Zionists) … seek to foment insecurity," the senior IRGC commander added.