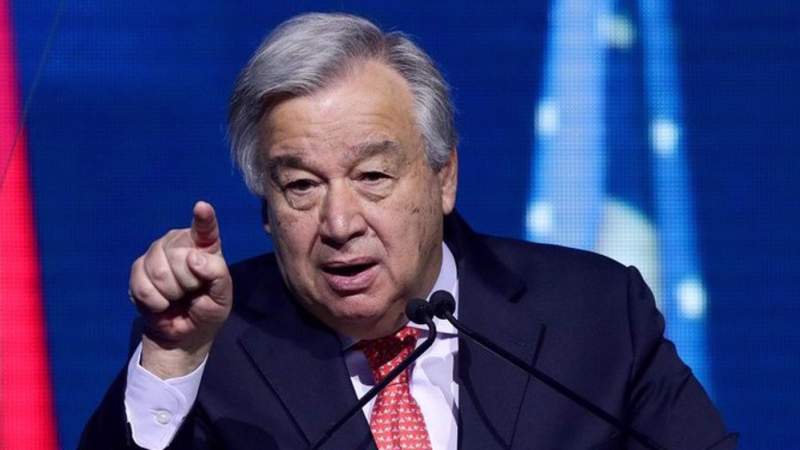 “I often take the UN secretary-general for a member of the US White House or its State Department,” Choe said in a statement published by state media.

“I express my strong regret over the fact that the UN secretary-general has taken a very deplorable attitude, oblivious of the purpose and principles of the UN Charter and its proper mission which is to maintain impartiality, objectivity and equity in all matters.”

"The Secretary-General strongly condemns the launch of yet another ballistic missile of intercontinental range by the Democratic People's Republic of Korea," said a statement from his spokesperson.

Guterres’s statement followed strongly-worded statements of condemnations of the North's ICBM test by the US and other countries.

The launch came a day after North Korea fired a short-range ballistic missile after it warned that it would take "fiercer" military action if the US further enhanced its "extended" military aid to the regional allies.

Choe slammed the UN chief for overlooking the US and its allies taking the North’s ICBM test to the UN Security Council, saying that it proves that "he is a puppet of the US."

"We recently warned the UN secretary-general to consider the issue of the Korean peninsula on the basis of impartiality and objectivity," Choe said.

She reiterated her country's right to self-defense amid "the worrying security environment in the Korean peninsula and the region caused by the US and its vassal forces' dangerous military cooperation".

"Nevertheless," Choe said, "the UN secretary-general shifted the blame for the case onto the DPRK rather than the US". She used the acronym for North Korea's official name.

Pyongyang’s missile launches have come in response to Washington’s massive land, naval and aerial war games, along with South Korean and Japanese forces in the region – measures that North Korea regards as practice drills to invade the country.

Earlier this week, North Korean leader Kim Jong-un vowed his country's response to US threats with nuclear weapons amid Washington’s ramped-up military activities in the region, including joint exercises with Seoul and Tokyo.

Kim censured US’s joint exercises with Japan and South Korea as "hysteric aggression war drills" and warned if Washington continues to make threats against the North, Pyongyang “will resolutely react to nukes with nuclear weapons and to total confrontation with all-out confrontation.”

Washington and Seoul have markedly stepped up their muscle-flexing near the North's maritime border and airspace.

North Korea maintains that it will not tolerate US-led war games in the region, vowing reciprocal actions with its own drills.