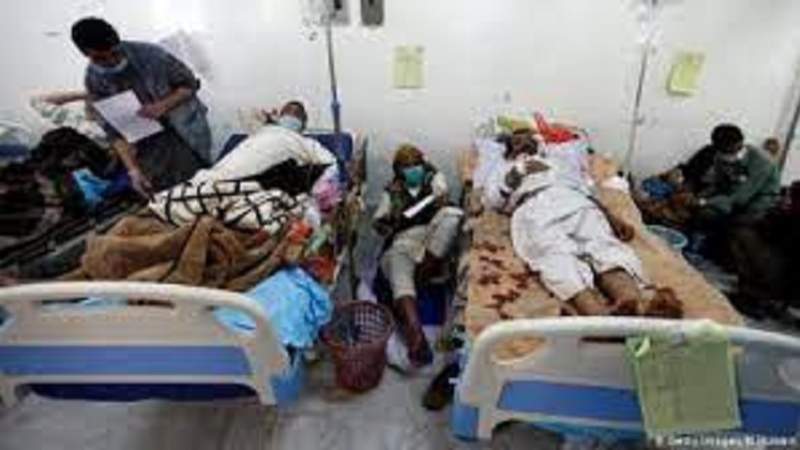 Yemen: The new confrontation of the dengue fever epidemic continues to spread and kill many children and adults on an unprecedented scale in Taiz Governorate, southwest of Yemen, amid a deterioration in health services due to the pro-aggression authorities' negligence.

During the past few days, a large number of citizens, including children, died in the city of Taiz, southwest of Yemen, as a result of a large and rapid outbreak of dengue fever in the city, which was classified by health centers in Taiz as the most deadly compared to previous waves of the same disease during the past years.
Activists from the city of Taiz accuse the health authorities of the coalition authority of failing to confront the dengue fever pandemic.
Many of the governorate's residents also complain about the spread of febrile disease in a very frightening manner, with the lack of health centers and doctors, to limit the spread of the epidemic and its serious repercussions on the health of patients.
In this regard, Tayseer Al-Samei, Deputy Director of Media and Education in the office of the Ministry of Public Health and Population affiliated to the pro-aggression governorate, in a statement to Al-Mahreya TV last October 25, called for the need for the “Coalition Authority” to provide a center specialized in fever and dengue fever, because many deaths occur due to wrong treatments. “‏
And medical and health centers in Taiz revealed that "the bulk of those infected with dengue fever in the city of Taiz suffer from the pain of the disease in their homes because of their weak, deteriorating financial condition or because of their lack of confidence in the quality of medical services in hospitals."
‏
Dr. Samir Sufyan, Director of Al-Rawda Hospital, said in a previous statement that there are no advanced devices for testing, adding: “We do the tests through special slides such as (NTG” and “NT Body”, which dengue fever was confirmed in the early days, and we used to provide “dengue ” examinations, and each case was followed up until it reached the last stage, and it was confirmed that it had dengue fever.

Despite the disagreement about the exact statistics on the number of infections and deaths, everyone agrees that the epidemic has settled in Taiz governorate and allowed it to be neglected by the city authorities, and that its danger is increasing day after day.

According to the Epidemiological Surveillance Center in Taiz, the number of cases of dengue fever in Taiz since the beginning of this year until today has reached 11,500 cases, including 17 deaths.

The last victim of the deadly virus was the death of the young woman, Huda Mujahid (20 years), from the “Al-Kamb Bazara” neighborhood, days after the death of the 6-year-old “Marwa Alaa Abdo Ali”, who died 24 hours after the death of her 9-year-old brother, “Muhammad”, after they had a dengue fever, while the mother of the two children is still in intensive care.
And the Ministry of Health and Population in Sana’a had confirmed, in a press conference last Wednesday, that the number of deaths due to malaria and dengue fever amounted to more than 260,000 cases from 2015 until the end of 2019, in which the coalition war had the largest role in its spread.
At the conference, the Undersecretary of the Ministry of Health for the primary care sector, Dr. Muhammad Al-Mansour, confirmed that the activities and plans of the malaria control program had faltered due to the war and the blockade, which led to an increase in malaria cases from 513 thousand cases in 2015 to one million and 100 thousand cases in 2019.
#Taiz #US_Saudi_Aggression #Humanitarian_Disaster 22-11-23