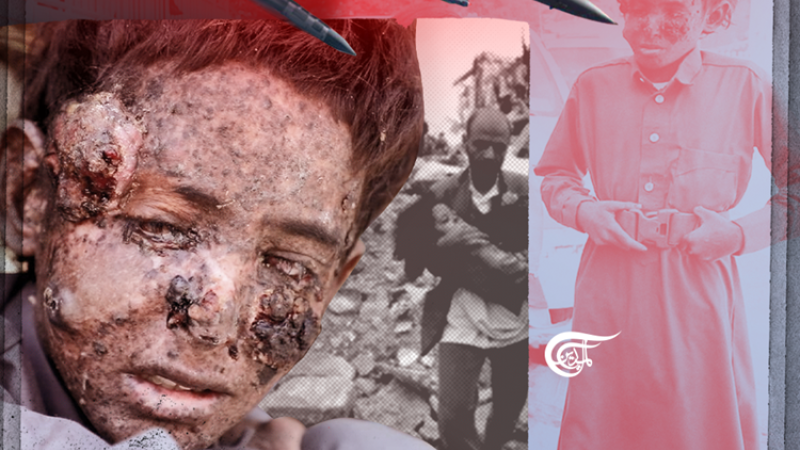 Yemen-  A Story In Picture:   Who distorted the beautiful face? Four children from the Al-Humaimi family, were infected with cancerous tumors after a US-Saudi raid targeting a site near their home in Sa’adah province. For the past seven years, the children have faced a grim fate amid the imposed a siege that prevents them from traveling for medical treatment abroad.

Their faces are the mirror of the truth, reflecting the violations of the US-Saudi aggression on Yemen. Nasser, Muhammad, Abeer, and Amna, the four Yemeni children were distorted by the war, and its poisonous gases left them with an insidious disease.
It was supposed to be a normal school day, the children prepared to go to school, they loaded their bags and put books, pens, dreams and wishes in them. However, a US-Saudi raid targeted a location near their home in Kitaf city in Sa'adah province, completely changed their schedule,and plunged them into an inescapable dark tunnel.

Since 2015, the four children have been living in isolation from the world. The poison and smoke of the raid caused them skin cancerous tumors. Look closely at the picture above, it is Nasser Al-Humaimi, one of these children, and the most affected by the injury, his face’s skin has begun to melt gradually, and the tumor is forming in more than one place on his face.

Nasser told Al-Mayadeen net: "I went to school for only 5 days, and after that I had a break. I wish I could go back to school."

Mohammad, also had skin cancer as a result of the poisons of the raid, sores and scars spread on his face, part of his nose melted, we tried to ask him what happened, and who distorted his face? But he was unable to talk, his tears did not stop, making one ask oneself: “How false, deceitful, and unjust this world is.

The health status of Abeer and Amna may seem better than their brothers Nasser and Mohammad, but no one can guarantee that they will not meet a similar fate if no organization intervenes to provide treatment for these children and put an end to their tragedy.

For seven years, Matar Al-Humaimi has been suffering with his four children, moving them from one hospital to another, trying to find a way for them to treat, but the heavy financial costs piled up on him, and the Saudi blockade put more obstacles in front of him. He was unable to travel with them for treatment abroad.

Matar says to Al-Mayadeen net: "After months from the beginning of the US-Saudi aggression, my children's lives were turned upside down, they were deprived of their most basic rights as children, they are isolated from everything, they do not play, study and live. We did not receive help from any organization, and the siege blocked access to their treatment.

The four children are not the only victims of such horrible crimes. In 2019, the official reports of the Ministry of Health indicate that the closure of Sana’a airport to critical cases caused the death of over 43 thousand patients, in addition to over 28 thousand cases of cancer patients, due to the siege and lack of necessary medical supplies.