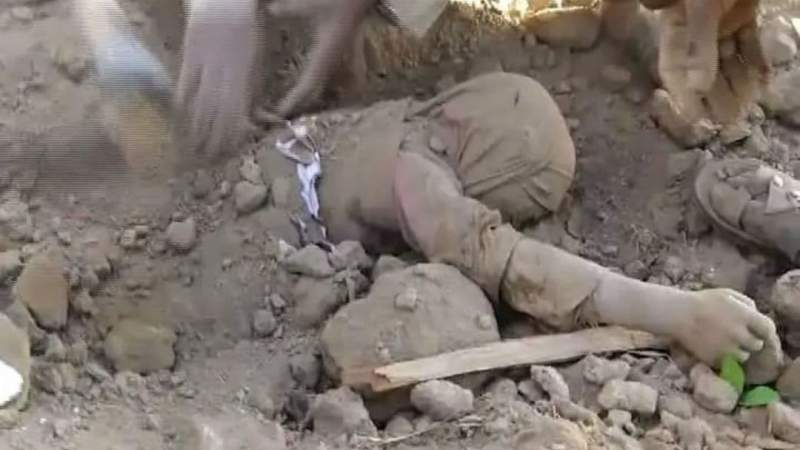 Weddings in Yemen are no longer a happy occasion most of the time, as the US-Saudi air raids from 2015 to 2018, have targeted the most important events in Yemeni society, which are weddings, including women's weddings. Throughout the 30 months of war on Yemen, weddings were an opportunity for the warplanes to target the happiness of Yemeni society and turn them into a collective funeral, in which dozens of bodies scattered in the wedding halls and camps.

Women Under the Ashes
In 2017, the governorate of Marib, in particular, and Yemen in general, woke up with a heinous crime that was committed by the aggression's warplanes. The aggression bombed a women's wedding camp in “Al-Hisan” district in Marib governorate.
By several missiles, targeting women and children, who were celebrating a happy day, the aggression turned it into great hell. 13 women and 4 children were killed and dozens of women and children were injured, innocent bodies were burned by the missiles of hatred and tyranny.

Claims of Investigations
At a time when “Hadi government” was silent about the crime, the head of the Revolutionary Committee, Mohammad Ali al-Houthi, demanded, through press statements on July 18, 2017, to form neutral international committees to investigate the massacres of coalition forces.
Officials in the Sana'a government called for the intervention of the United Nations and Amnesty International in the investigation of the crimes of targeting a woman's wedding in Marib.
Yemeni media also published official reports and investigations confirming that the coalition warplanes had committed the crime intentionally.

Converting Weddings into War Crimes
The crime of targeting the women’s wedding in “Al Hisan” Marib was not a unique case, as several Yemeni regions have witnessed during the past few years dozens of massacres that are committed by the coalition's warplanes, bombing weddings in Yemen. The coalition warplanes targeted many processions and wedding halls, dozens of civilians were killed, as happened in a wedding procession in Damt on April 23, 2017.
On the night of October 17, 2015, Yemen was traumatized, as more than 81 people were killed and injured, including women and children, in the bombing targeting the wedding in Sanban area, east of Dhamar Governorate.
This came weeks after a horrific massacre that was committed by the coalition of the aggression on September 28, 2015 against a wedding ceremony in Al-Mokha in Taiz governorate, killing more than 135 citizens, most of them are women and children, in addition to injuring dozens of others, in one of the most violent Attacks on civilians in Yemen, since the beginning of the aggression.
On February 15, 2017, the aggression targeted a women's wedding party, in, Arhab district, Sana'a governorate, killing eight women, and wounding dozens of children and women.
On April 22, 2018, the coalition warplane turned a wedding party into a funeral in Hajjah governorate, killing and injuring 88 citizens.

The Alliance Denies and Justifies
These incidents were mass killings and complete genocide, requiring the international community and the concerned organizations to form urgent investigation teams and to uncover the party that caused the bombing and targeting of wedding gatherings in the various Yemeni governorates separately.
For its part, the coalition stood in a position of self-defense, as the former spokesman for the coalition, Ahmed Asiri, came out more than once to deny that the coalition warplanes bombed civilians in Yemen, then he has said, justifying, that these crimes were unintended mistakes, blaming the “government” Hadi “for submitting the wrong coordinates.Weak International Position
On October 2, the UN Human Rights Council unanimously adopted a resolution with many flaws, ignoring calls for an international investigation into the escalating violations in Yemen.The Netherlands had initially submitted a draft resolution authorizing the United Nations Mission to document committed violations by all

parties since September 2014.
The proposed United Nations investigation faced public opposition from many members of the coalition, such as Qatar, Bahrain, Egypt, Jordan, and the United States-led Emirates.
The coalition countries were able to manipulate the mass killing of civilians in Yemen, through the Human Rights Council's approval of the Arab Group project, which provides for the support of the Yemeni Human Rights Committee that was formed by Abd Rabbo Mansour Hadi.
However, since the issuance of its formation decision, it has not carried out any investigations regarding the civilian victims who were killed in air or ground bombardment.
Thus, the massacres of the weddings of the Hisan, Sanban and Mokha families will be recorded against an unknown, since the coalition countries and the countries supporting them do not pay any attention to the lives of civilians and innocent people in Yemen.