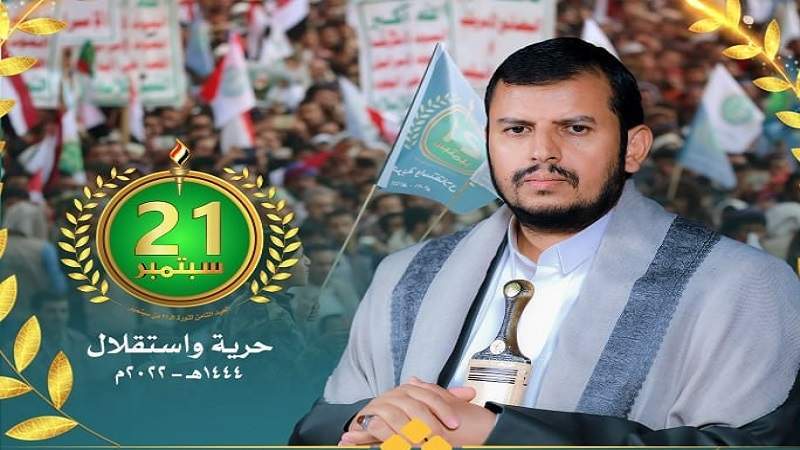 News - Yemen: The Leader of the Revolution Sayyed Abdulmalik Al-Houthi says the United States tried to ignite chaos in Yemen in order to take full control of the country, but the popular revolution of 2014 thwarted the plots.

“The September 21 Revolution, from the religious, moral and national point of view, was and still is a requisite [for the country] and benefits our nation,” he said. “The revolutionary movement was broad in its title, goals, and popular momentum, and it did not belong to a specific group but rather to all Yemeni people.”

Stressing that the Yemeni revolution took place at the time when American policies held sway in the country, the Leader said such policies plunged Yemen into total destruction and the US tried to use the conflicts at the beginning of the revolution to its own advantage.

“Before the revolution, the American ambassador was  the president of Yemen,” he said, adding, “The Americans tried to exploit the independence of our nation and dominate our country indirectly and without war. The American plot was based on increasing the political divide in line with the internal disintegration of our country.”

The Leader said the US was working to strip the Yemeni army of its military capabilities, and that Washington had turned its embassy in Sana’a into a headquarters for managing all sabotage activities in Yemen.

“All Yemeni parties were sure that what the American ambassador in Sana’a was doing represented a clear violation of the country’s sovereignty and independence,” Sayyed Abdulmalik said. “There were Yemeni political parties that were responding to American demands, but the movement of the Yemeni people left the Americans confused.”

He said the aggression against Yemen revealed the reality of those who want to continue their domination over it and that of their hostile policy.

“The aggression targeted government facilities and service facilities, which shows the American intentions to destroy everything in our country,” he said. “The coalition of aggression destroyed all infrastructure, and targeted even courts, prisons, cemeteries, schools and others.”

Elsewhere in his speech, the Leader of the Revolution lashed out at a move by a few Arab countries to normalize their relations with the Israeli regime, saying Yemen stood against such a US-inspired move.

“Washington and its allies are seeking to bring about change in the region, under the title of normalization and the loyalty of Arab regimes to Israel," he said. “Yemen stood against the path of normalization and stood by the Palestinian cause and the free people of the nation against its enemies.”