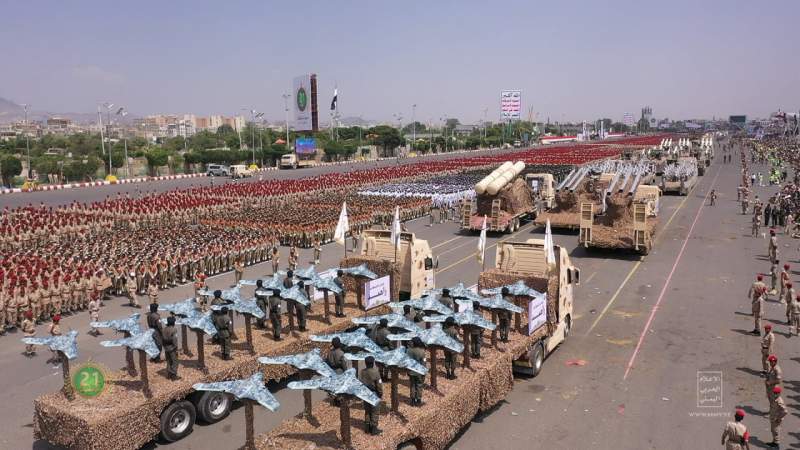 Yemen: We can say today that Sana’a, with its leadership, people, and its military, security and civil institutions, has proven that it is a state not a militia, as the coalition of the US-Saudi aggression used to accuse it in propaganda during the past eight years.

The expression of the former UN envoy, Jamal bin Omar, is still the most accurate description of what happened and is happening and perhaps what will happen later, when he described liberating Sana’a, the fall of General Ali Mohsen al-Ahmar and the success of the September 21 revolution, as he said that it is a “miracle”.

Sana'a has made great strides in building the state, and turned the challenge imposed by the aggression and the siege into an opportunity to stabilize the pillars of the state. It strengthened its foundations, types of weapons, some of which were shown in military parades, the most recent of which is “The Promise of the Hereafter”.

In parallel with the construction of the Armed Forces, the security services affiliated with the Ministry of the Interior were also not hesitant to paint a bright picture of what the Yemeni people aspire to, by having security that ensures the service of the people, a security that is able to provide the required protection, after purging its ranks of traitors to the homeland.

It was not an easy mission which is an important task, however what helped Sana’a is the joining of the mercenaries to the coalition of aggression, so the loyal leadership devoted itself to rebuilding and preparing, intensifying courses in Police College and School, and introducing young, energetic, clean and dedicated individuals.

The security achievement came by imposing a state of silence and stability in the various regions and governorates, despite the dangerous and malicious targeting by the aggression, and all forms of security war, zeroing the rates of bombings and assassinations, thwarting plots, uncovering cells, tracking down Takfiri individuals and arresting many of them.

The military parade of the security units of the Ministry of Interior in Sana’a is no less important than the military parade in Hodeidah. It came after witnessing the largest detonating devices massacre against the Armed Forces while they were preparing for a military parade on the occasion of Unity Day, in a show that could give a clear answer about the nature of security, its tools, and the background to the success of the security services before the September 21 revolution.

The highest levels of security witnessed by Sana’a is not only better than what the Southern occupied areas face, but it can be compared to the most secure and stable countries.

The security services used to receive “continuous support” from the US and the Ten Guardianship countries, according to what we always heard in the meetings that brought together the then American ambassador, Gerald Feierstein, with the president, the interior minister, or the rest of the security officials, and with this the security situation was going smoothly from bad to worse.

The bombings and assassinations spread, and incursions reached the Ministry of Defense itself, the headquarters of the Ministry of Interior and the Police College, and even in the heart of the Central Security Forces and next to it.

What we see today at the various political, military, security and economic levels, facing the siege, the stability of the currency in Sanaa and its deterioration in the occupied areas, all indicate that the efforts of aggression have been in vain. It also confirms that the coming days will be full of pleasant surprises.