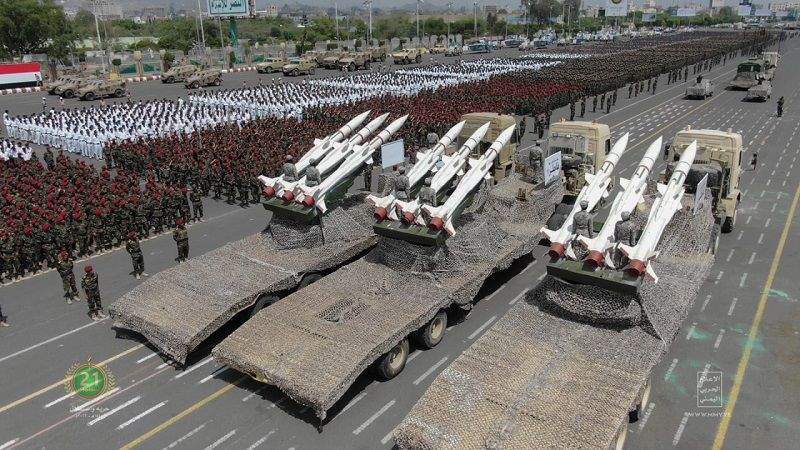 Yemen:   In each parade of the Yemeni army units, Sanaa reveals new or more improved weapons and capabilities than what was shown in the previous parade.

The messages of each weapon come to show the Yemeni armed forces in a broader area of   confidence, capabilities and advantages, these messages form a clear road map for the next stage.
The recent parade, which was held in Sanaa, on the occasion of the 8th anniversary of the September 21 revolution, in the presence of President Mahdi Al-Mashat and state leaders, various systems of strategic deterrence weapons were revealed, including ballistic and winged missiles, drones, and air defense missiles in addition to the naval missiles.
All that was revealed in addition to the message of enormity, strength, and the specific and distinctive specialization of each of those weapons and capabilities that were revealed, determine the next stage, which will undoubtedly impose Yemen in the near future at all levels, regionally or internationally.
First: The message of the weapons and their features, came to confirm its ability to reach to the farthest regional extent inside occupied Palestine and on the Its southeastern maritime borders in Aqaba and Eilat.
Yemen now can target in the depth of the entire vital marine theater, which is linked to its strategic geography, starting from Bab al-Mandab and extending west and southwest to the entire basin and coasts of the Red Sea countries on the one hand, and extending east and north, to the Gulf of Oman and the Arabian Sea, all the way to the north Indian Ocean.
All this was shown by the capabilities of the naval missile systems that were revealed in the parade: "Asif", "Mohet" and the "Red Sea" missiles.
These naval missiles will be, along with other auxiliary naval weapons including mines or naval boats, a thundering arm for carrying out the strategic naval deterrence maneuver, which will constitute the decisive point in imposing an effective end to the aggression, through a final cease-fire and military operations, and through the lifting of the siege and the initiation of negotiations for a just and correct political settlement.
Second: The message of the sincerity of the promise and the path that may be the most important, and the aggression must pick it up and understand its dimensions and seriousness, from the words of the leader of the revolution, Sayyed Abdulmalik Al-Houthi.
Sayyed Abdulmalik talked in a speech a day before the parade about the entire course of confrontation since the start of the revolution on September 21, 2014. He mentioned its principles of rejecting hegemony and preserving sovereignty, passing through the course of confronting aggression in the arenas and on the frontlines.
He said that with the generous sacrifices and huge efforts involved in training, fighting, developing and manufacturing quality weapons, which created a striking and shocking difference, the Yemeni armed forces today in terms of strength show superiority over the aggression’s weapons and capabilities.
The other point that the aggression’s leaders must understand to help them capture the opportunity, lies in the credibility and stability of the confrontational march that the Yemeni national people and their military forces fought, during the following stages:
- The stage of the beginning of the US-Saudi aggression, which surprised it and the whole world, with the ability of the Yemeni people and its military forces to stand firm, and steadfastly despite the great difference in capabilities, and at a time when the aggression’s assessment was that this stage would not exceed several months, it extended to eight years with unprecedented steadfastness.
- The stage of stabilization of the frontlines and field progress, which was shocking to the aggression and its supporters, as the Yemeni Armed Forces demonstrated distinct capabilities in fighting tactics and special operations, both in defense and in retaliatory attacks. This stage coincided with an internal Yemeni surge in the manufacture and development of capabilities and weapons, especially missiles and drones, to reach an advanced level In its capabilities. The Yemeni Armed Forces imposed strategic deterrence equations, which constituted a pivotal point in the war and confrontation.
Hence, the aggression today must first abandon its arrogance, which was one of the main reasons for its failure and defeat. Secondly, it must evaluate the course of the battle of the Yemeni National Army and its military forces, in a serious and objective manner and far from the ignorance that the end will be nothing except success and victory for Yemen.
An article by Sharl Abi Nader translated by Almasirah English website
#US_Saudi_Aggression #Military Parade 22-09-26