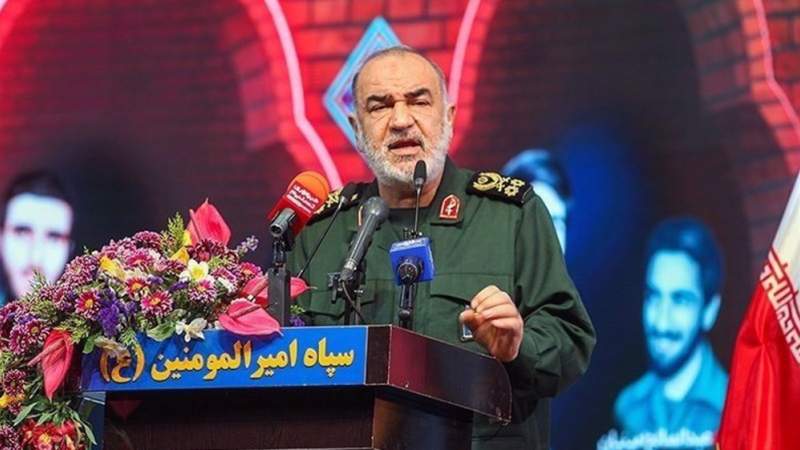 News - Middle East: The chief commander of the Islamic Revolution Guards Corps (IRGC) has warned enemies that the Islamic Republic will definitely avenge their “interventionist and mischievous actions.”

Major General Hossein Salami made the remarks in Tehran on Friday while speaking to reporters on the sidelines of the nationwide rallies to commemorate the anniversary of the US embassy takeover in 1979, better known as “Den of Espionage,” which is named the National Day against Global Arrogance.

“The enemies are well aware that we will definitely respond to their interventionist and mischievous behavior; but now, we cannot say where and how this will take place," Salami stated. Whoever disturbs the Iranian nation's peace will never enjoy peace, he said.

Pointing to the people's massive participation in the rallies, he said there is no danger against the Islamic Revolution due to the fact that "the enemies of our country are disappointed with the outcome of their actions against these people."

"Those enemies who said they were not focusing on the revival of the JCPOA (the 2015 nuclear deal, officially known as the Joint Comprehensive Plan of Action) have now focused on Iran’s internal affairs," the IRGC chief said.

"The enemies have put their forces on alert and are worried the Islamic Republic may take action against them. Accordingly, they have now retreated into a defensive shell for fear of Iran’s action. Indeed, this demonstrates the truth about us," Salami stated.

Referring to the riots in Iran sparked by the death of a young Iranian woman in police custody last month, the Iranian general said Iran has warned the main culprits to stop walking such a "perlious" path, which has been outlined by adversaries to mislead people.

Riots broke out in Iran in mid-September after the controversial death of Mahsa Amini. The 22-year-old fainted at a police station in the capital Tehran, and was pronounced dead three days later at a hospital. An official report by Iran’s Legal Medicine Organization concluded Amini’s death was caused by an illness rather than alleged "blows to the head" or other vital body organs.

In the meantime, rioters have been gliding on a rampage across the country, receiving substantial support from Western powers, not least the United States, brutally attacking security officers and doing massive damage to public property notwithstanding.

Iran’s Intelligence Ministry and the IRGC Intelligence Organization released a statement on Friday to highlight the major role of foreign intelligence agencies, especially the CIA, in orchestrating the violent riots.

Late last month, the Intelligence Ministry announced the rioters had been backed by Western regimes and their mercenary media, which disseminated misinformation and distorted the sequence of events that led to Amini’s death even before the official investigation into the incident was announced.