Leaders of Cuba, Russia Pledge to Unite in Face of 'Common Enemy' 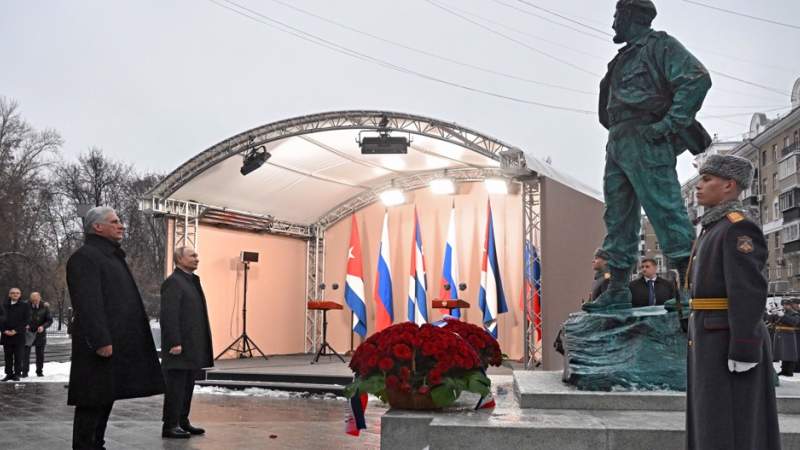 News - World: Russian President Vladimir Putin and his Cuban counterpart, Miguel Diaz-Canel, have pledged to deepen their friendship in the face of their "common enemy," the United States.

Putin received Diaz-Canel in Moscow on Tuesday, where they unveiled a bronze monument to Cuban revolutionary leader Fidel Castro, whom Putin praised as a "bright" man.

"We have always opposed various kinds of restrictions, embargoes, blockades, and so on," Putin told Diaz-Canel.

Russia has been hit by US sanctions over the conflict in Ukraine, and Cuba has been under a US economic embargo for more than six decades.

The Cuba leader, for his part, said both Russia and Cuba "are subject to unfair and arbitrary sanctions that continue, and they have a common enemy, the Yankee empire that manipulates a large part of the world."

Addressing the Russian parliament, Diaz-Canel backed Russia in its confrontation with the West, saying Moscow should stand firm.

"The reasons for the current conflict in this zone must be sought in the aggressive policy of the United States and the expansion of NATO towards Russia's borders," he said.

Putin declared what he called "a special military operation" against Ukraine on February 24. He said back then that the offensive was meant to "de-Nazify" Ukraine.

Before declaring the military campaign, Moscow had been demanding legally binding guarantees that Ukraine would never be admitted to NATO.

Since the onset of the war, the US and its NATO allies have supplied billions of dollars' worth of weaponry to Ukraine and imposed waves of sanctions against Russia.