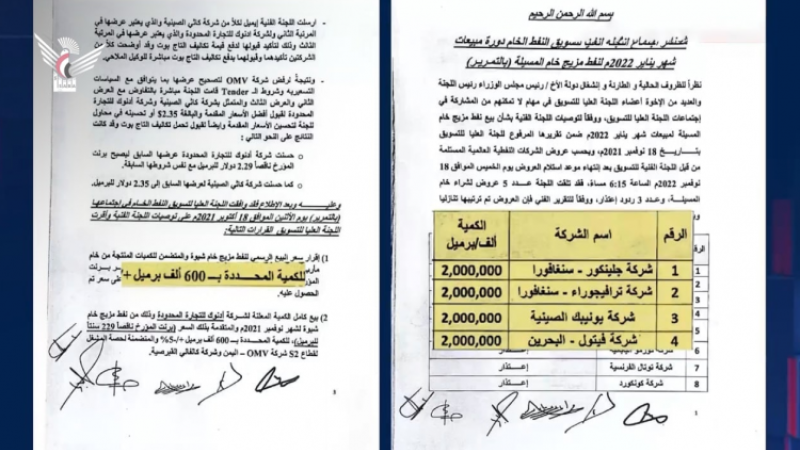 Yemen: More than two million and 600 thousand barrels of crude oil is the amount that the pro-aggression government is stealing and exporting monthly, before Sanaa imposed the equation of protecting oil wealth last October by preventing the entry of ships and tankers of looted oil into Yemeni ports.

Documents obtained by Almasirah channel revealed the extent of the plundering by the aggression and its mercenaries of Yemen's oil wealth, and part of its huge revenues were used to finance its hostile operations against the Yemeni people, who suffer economic and humanitarian crises that are the largest in the world.
The documents included a tender for the sale of looted crude oil from the fields of Masila, Shabwa and Marib to a number of foreign companies, through the so-called "Higher Committee for Crude Oil Marketing" of the US-Saudi mercenaries.
The documents showed that the amount of sales of Messila crude amounted to two million barrels per month, while the monthly quantities of oil sold from Shabwa and Marib crude amounted to 600 thousand barrels.
The same documents also revealed records between entities affiliated with the Ministry of Oil of the pro-aggression government and the Emirati company, ADNOC, about expectations of doubling oil exports from Shabwa and Marib crude to one million and 200 thousand barrels per month.
While a document issued by the leadership of the Ministry of Oil of the mercenaries called for expediting the re-production of Sector (5) oil after the readiness of its facilities in order to raise the exports of the stolen oil.
For more than seven years, the US-Saudi aggression and mercenaries continued to plunder the country's basic revenues from oil and gas, which constituted 80% of the state's general resources until the year 2014 and contributed to covering most government expenditures and payments, including employee salaries.
Despite their control over the bulk of the resources of the public treasury, foreign exchange, and all sources and revenues of oil, gas, customs, grants, international aid, etc. The aggression and its mercenaries still refuse to pay the salaries that they cut off since 2016 by transferring the central bank jobs to Aden.
Instead of paying the salaries of state employees, providing the necessary services to the general public and alleviating their suffering as much as possible, the US-Saudi aggression and mercenaries took advantage of the huge financial revenues from oil exports and the sale of gas, in favor of their aggressive operations against Yemen. They share huge sums of money from the Yemeni people’s wealth, using them by their leaders that have become their own real estate and investments in many Arab and international countries.
In light of all the systematic looting of the country's wealth, the United Nations and the international community's failure to put an end to what the aggression and its mercenaries are doing, the revolutionary leadership and the Supreme Political Council had no choice but to issue explicit warnings to oil ships and companies against entering or approaching the Yemeni oil ports.
Despite the importance and effectiveness of Sana'a's recent decision to prevent the plundering of oil wealth, which many observers described as wise and correct, the leadership in Sana'a did not want the matter to reach this level had it not been for the intransigence of the other party.
It had previously demanded more than once, through the United Nations in various forums and stages, neutralizing the economy and the sovereign wealth of the country, and exploiting its revenues for the benefit of the people, starting with the payment of salaries to all employees.
During last October, Sana’a refused the continuation of the so-called UN- sponsored truce aimed at perpetuating a state of no war nor peace, unless the US-Saudi aggression and mercenaries commit themselves to completely lifting the ban on Sana’a International Airport, opening the port of Hodeidah to food and fuel imports, and allocating oil and gas revenues for the delivery of salaries. All demands contribute to alleviating the suffering of the Yemeni people as a result of the aggression and siege, as they are legitimate rights for the people and are not a favor or gift from the forces of aggression and occupation.
#US_Saudi_Aggression #US-Saudi Looting of Oil 22-11-23