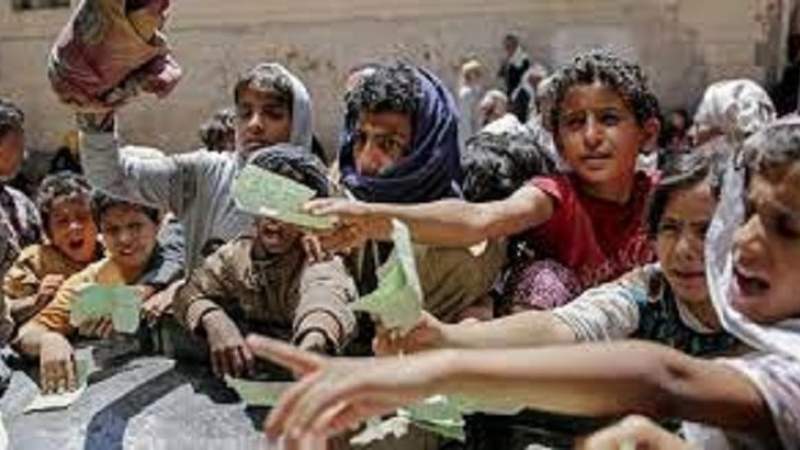 Yemen: The military campaign of the coalition countries launched from the first moment of their war on Yemen on March 26, 2015, aiming targeting the Yemeni economy as one of the main weapons used to starve the Yemeni people in the belief that it will subject the Yemenis to its colonial policies, by plundering of sovereign wealth.

The economic war on Yemen has taken two parallel paths, one of which was the direct military targeting, which is represented by the destruction of the infrastructure of a service and economic nature, such as factories, farms, places for raising livestock and poultry, electricity generation stations, roads and bridges. And the other path was represented in weakening the local currency and opening the doors to plundering state budgets by  pro-aggression government’s officials.
Currency Tampering

The first steps of the economic war were the transfer of the Central Bank from Sana’a to Aden on September 6, 2016, and the suspension of foreign banking transactions with the bank in Sana’a, which greatly hindered commercial movement as a result of not opening bank credits abroad in order to enable merchants to cover the internal market with the necessary needs of basic commodities and supplies.

The coalition's economic war also used the fabrication of the problem of lack of liquidity, and its gradual withdrawal from the market, which resulted in stopping the payment of salaries to employees, and the deterioration of the price of the national currency until the coalition found a justification for printing a large surplus of the local currency. This led to a state of high inflation of the Yemeni riyal, which greatly contributed to the significant deterioration of the Yemeni economy during the last five years.
In the face of the failure of the measures taken by the two central centers of Aden, in the middle of last year, to stop the collapse of the local currency exchange rate, the latest of which was the closure of more than 80 exchange companies and the use of the mechanism of selling the dollar through auctions, the coalition government admitted,its complete inability to confront the crisis, as its president Moeen Abdul Malik said, in early September 2021.

The pro-aggression government called for urgent financial assistance from donor countries and international organizations to save the economic and humanitarian situation. However, it excluded both Riyadh and Abu Dhabi from its demands to save the economic situation, despite receiving Saudi promises of generous economic support to improve the situation of dilapidated public services, and stop the deterioration of the exchange rate of the Yemeni riyal against foreign currency.

The Kingdom quickly reneged on its promises, accusing the government of “Moeen Abdul Malik” of plundering the Saudi deposit provided at the beginning of 2018, as support for the Yemeni currency, after the reports of the United Nations Committee of Experts confirmed the Bank of Aden’s involvement in money laundering crimes.

In the same regard, all the futile attempts of the “coalition government” since the transfer of the Central Bank from Sana’a to Aden failed to stop the spiral of accelerating economic collapse and the significant deterioration of the local currency, which naturally led to an increase in poverty, hunger and high prices in the areas under the control of the coalition.

The coalition government insists on implementing the strategy of failure, the relationship between patchwork solutions and the approach of dismemberment, between corruption, betrayal and plundering of wealth, between stagnation and closure, between futile attempts and organized corruption, between extreme poverty for the citizen and massive expenditures for the official, between personal interests and official trade in selling Yemen at a cheap price.

According to observers and economists, the coalition government caused more economic collapse and brought the majority of families living in the occupied governorates to the brink of hunger, which prompted thousands to die. The cities of Taiz, Aden, Mukalla, and a number of areas in the governorates of Lahj and Abyan organized protests that raised slogans against the "coalition" and demanded its departure and the departure of its affiliated government.
Sanaa Demands

On the other hand, the National Salvation Government in Sana'a held the coalition government, Saudi Arabia and the UAE responsible for the economic and living collapse in the governorates under their control in particular and Yemen in general, demanding the restoration of state revenues in those governorates and returning them to the accounts of the Central Bank in Sana'a or in Special account under UN supervision.

According to observers, Sana’a’s demand received great popular support in Yemen, since restoring the looted Yemeni oil and gas revenues, which are estimated annually at two billion dollars and which are supplied to the National Bank of Saudi Arabia. The revenues are sufficient to solve the Yemeni riyal crisis and restore its purchasing power to normal, and are sufficient to pay the salaries of the employees which have been cut since 2018.

However, the US-Saudi aggression continues to plunder sovereign wealth, in light of Riyadh's insistence on confiscating the looted Yemeni oil and gas sales in its banks, refusing to supply them to the accounts of the "central Sana'a and Aden", which prompted the Sana'a government to start using military force to stop the looting of sovereign wealth.
The US Leads the War
According to observers, the repercussions of the Russian-Western war in Ukraine, which resulted in a suffocating energy crisis, prompted the United States to provide every drop of oil and gas for its European allies, which prompted it to throw all its weight in controlling Yemen's oil and gas, which is very much evident in its recent military presence in Hadramawt oil province in eastern Yemen.
Although the American starvation war on Yemen will only bring more misery to a people classified by United Nations reports as the largest humanitarian crisis in the world, the Biden administration is tending, at the present time, to adhere to the policy of controlling Yemen's oil and gas, as a fixed strategy it takes towards Yemen.
The same applies to negotiations for a final solution in the future, in a way that guarantees continued control over the sovereign wealth of Yemen, which has become a serious matter for Washington and its allies.
In this regard, on June 11, the deputy foreign minister of Sana'a, Hussein al-Ezzi, warned the coalition of what he described as "new adventures in Yemen."
Al-Ezzi said, in a tweet on Twitter, that "the adventures of the coalition in Yemen will lead, this time, to dangerous and confusing repercussions for the Gulf region as a whole, and this will certainly not be in the interest of anyone," referring to Sana'a's possession of power cards represented in its ability to target Gulf economic interests.
Source YPA translated by Almasirah English website
#US_Saudi_Aggression #Armed Forces #Economic War #US-Saudi Looting of Oil about 3 days